Luke Oswald has been playing drums for over 20 years and has played in numerous bands providing a variety of experiences that lend to his ability to play multiple musical styles.

He is currently the drummer for The Innocence, a Midwest favorite that specializes in Classic Rock, Country, and popular music both new and old. He also plays with Formerly Three, a unique two piece band that plays everything from jazz to Motown, classics from the 50’s and 60’s as well as today’s modern hits. You can check out some of his latest performances on his YouTube Channel.

in addition, Luke has been very involved in pushing his own performance and production abilities to the next level through extensive study and has a deep interest in sharing this knowledge with others. Fueled by his passion to inspire others to push themselves to new musical heights, he has created DrumAngle.com, an exclusive e-drum education website where he provides educational, technical and inspirational content not only for drummers, but for all musicians alike. DrumAngle.com also features numerous performance videos based around various musical styles and the use of sample based technologies and Jobeky Drums/Cymbals. 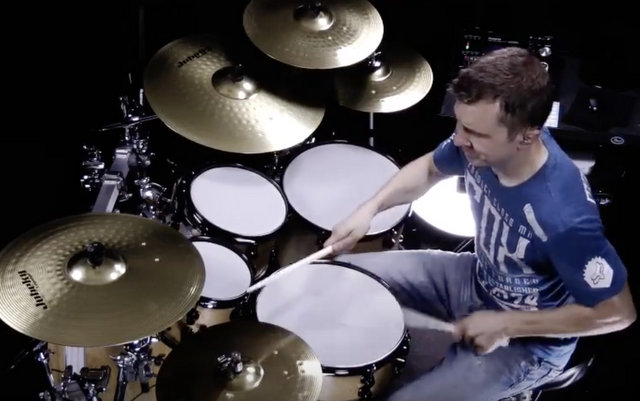 To further educate on the benefits of drum sample technology, Luke is also an author/content creator at Groove3.com, the producer of high quality training videos for the pro-audio community. Groove3.com provides educational content for virtually every product and topic related to music and music production. Luke’s growing library of tutorials/lessons caters specifically to the e-drummer.

“To me, teaching is as inspiring as performing. When you teach, you’re forced to understand the topic at a much deeper level. I love the process of learning and improving, and to me teaching is just an extension of that process. I learn something new every time I teach anything, whether it be a drum lesson or a software tutorial. I also believe as artists we have a responsibility to pass on the knowledge that we’ve accumulated. You must take action and apply what you’ve learned to your own life, but that only goes so far. If you can take what you’ve learned and share it with someone else, you’re giving them the opportunity to take that knowledge, nurture it and allow it to influence their own lives. Eventually, they can pass that knowledge on to someone else, and the process keeps going. You never know the impact you can have on someone simply by sharing with them what you’ve learned.”

“I’m very passionate about encouraging, inspiring and educating others. I want to take every opportunity to share what I’ve learned and what I continue to learn. As I state on my own website, “Knowledge is meaningless without action.” The action you choose to take with the knowledge you’ve accumulated could be (and should be) to apply it to your own life. But I believe you should also put this knowledge to work by sharing it with others. There are very few things in life I enjoy more than taking what I’ve learned, sharing it with someone else and seeing the same excitement and inspiration in them that I’ve seen in myself.” 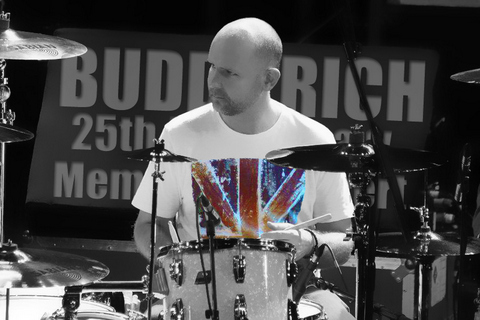 His West End Credits include the Lion King, The Rat Pack, The Bodyguard, Jersey Boys,Thriller and Priscilla Queen of the Desert.

He runs his own band that has headlined at Ronnie Scotts club in London on more than one occasion and released an album -is that not what you wanted.
In 2012 Elliott had the idea to produce a 25th Anniversary Buddy Rich memorial concert at the Palladium in London. He was the creative director of the event hosted by Buddy’s Daughter Cathy Rich and he performed alongside many leading names in the international drumming community.

Richard is currently one of the most sought after drummers and teachers in the north of England. Richard owns and runs the nationally renowned private music school ‘RAW Studios’.

Richard and his staff have an ever-growing list of private students from all over the UK for studio lessons and globally online. Beyond ‘Raw Studios’, Richard can often be found volunteering and running drum clinics, workshops and master classes across the country.

You can find out more about Richard by visiting his site: www.richardwilsononline.com or www.rawstudios.net 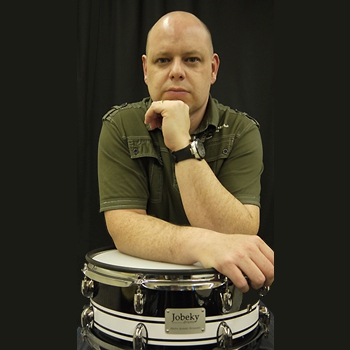 We are pleased to welcome Travis to the Jobeky family. Travis is a very talented drummer with a wide ranging career; as can be viewed below in his own words:

2000 – I formed an original Pop band called “Feedback”. After getting radio play on local South African radio station “Highveld Stereo”, we formed our own label and independently released our first album, “More than this”. Unfortunately, the band broke up about a year later.

2001 – My brother and I started a Rock band called “Pyramid Tongue”. During the bands 4 year existence, we achieved just some of the following: We won the RP Studios Emerging Sounds “battle of the bands” competition. We signed with Indie label, Legend Music and released our album, “Confusion reigns” and distributed through “Universal” South Africa. We reached the #1 Spot on the 5fm Modern Rock Chart with our single “Sterilizing Agony”. We reached # 11 single on the 5fm Top 40 chart with our Single “Tender Loving Abuse”. We briefly toured London, where we played numerous venues, including “The Water Rats”, “The Rock Garden”, “The West One Four” and “The Oh Bar”.

2003 – I decided to join the corporate drumming/percussion group “1st Project” on a session basis, whilst still part of Pyramid Tongue. Some of “1st Project’s” achievements, while I was involved include: Performing on the talk show edition of the Jerry Springer Show. Touring the Seychelles, and performing at the Royal Prince’s party at the famous Plantation hotel.

In addition, we released our first album, “For lack of a better word” through an independent record company, Inner Flame Music. (Please see attached reference). We have also appeared in numerous media publications including, “Purity”, “Blunt”, “Alberton record”, ”Tom X”, “Get it” and the “Splashy Fen magazine”. We independently released our second album, “This is where the money went”, which we just submitted for a 2010 SAMA award, and are also working on our fist live DVD.

2008 – In addition to focusing on “Munkinpure”, I formed my own percussion group called “iGrooves”. iGrooves perform mainly at corporate events, for which I have included a separate biography. There are now branches of “iGrooves” in both South Africa, and London.

2009 – Whilst still focusing on “Munkinpure” and “iGrooves”, I began to session for Contempary/Pop band “Walt”. “Walt” reached the #1 spot on Highveld Stereo with the single “Somewhere”.

I have played, and performed at various South African and International music festivals and appeared on many television programs. Some of these programmes include: FTV’s Music and Fashion series, Yo TV’s Buzz Show, Saturday Night Live with Jerry Springer, Dstv’s MK Channel, Mnet’s open time, The Phat Joe Show, ETV’s 20 something.

I won the Best Drummer Award at The National School of the Arts in 2002. I won SABC 3 reality show “30 Seconds To Fame” Competition Program in 2003. I have done many drum sessions (recorded and live). Some of the artists I have worked with, and continue to work with include: “Sian Wilkins”, “Ziller”, “Sheen”, “The Waiting Room”, “Voodoo Child”, “B-Daz”, “Denvor”, Maya and “Lonehill Estate”. I am currently featured on the South African drum website www.sadrummer.com. In 2004 and 2005 I was signed to Manifesto records, a sub division of Universal UK, with the Pop group, “Plastic Dreams”. We reached # 8 on the UK billboard charts with our single “Fuse”. I returned to South Africa shortly after the band broke up.

I have performed on the same stage, at various events with artists, such as Stained, Evanesance, 3 Doors Down, the Body Rockers, Seether, the Audio Bullies, Rodriguez, Arno Carstens and The Parlotones. I am currently working with American drummer, Johnny Rabb on a recording project yet to be named. We are hoping to have some of this material recorded by the middle of 2010.